A senior Ulster Unionist has demanded action to address a serious shortage of vets carrying out meat inspections in Northern Ireland.

Dr Huey explained that Northern Ireland could soon have to carry out the same number of agri-food checks as the EU currently does as a whole.

A Northern Ireland Protocol grace period limiting red tape on moving GB supermarket goods into NI has been due to expire at the end of March but  the UK has now extended that grace period until October, much to the anger of the EU.

In response to Parliamentary Question tabled by Lord Rogan,  the UK Government admitted contingency plans had been put in place in the event that the current contract to deliver official veterinary controls in Northern Ireland was not delivered.

Lord Rogan said: “I have been concerned about this developing situation for some time and I will be tabling further Parliamentary Questions to seek to establish a clearer picture of what exactly is going on.

“The disastrous Northern Ireland Protocol has clearly made the situation much worse, but the shortage of qualified vets to undertake certification responsibilities should have been dealt with long ago and certainly well before the end of the Brexit transition period.

“The UK Government and Food Standards Agency must get a grip on this situation and do so urgently.

“We need more vets and they must be fully-qualified, trainees will not do.

“It is yet another instance of the UK Government taking its eye off the ball on Northern Ireland in general and Brexit in particular.

“I commend Dr Huey for bringing this matter to wider public attention, but it should never have come to this.” 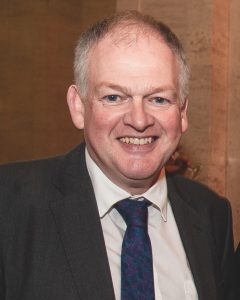 Dr Huey, above, told the Stormont committee the 1,350 GB lorries bound for Northern Ireland retailers every week would require 20-30,000 certifications between them when the grace period ends.

“And I’ve spoken about this to the commission on purely technical, not political, terms about ‘here is what I’m being asked to do by the Northern Ireland Protocol with my currently 12 vets, that’s not going to work’.

“That’s where we find ourselves. So the extension of grace period, if that is what occurs, is welcomed but it’s not the solution.”