More than seven million cats and dogs have fallen ill after digesting something toxic, with one in nine pets poisoned last year, a specialist insurer has said.

A survey found more than a quarter (28%, 4.6 million) of dog owners and a fifth of cat owners (19%, 2.5 million), believe their pet has fallen ill after consuming something poisonous.

Veterinary nurse Madeline Pike, said: “Pets are part of the family and seeing your dog or cat unwell is an owner’s worst nightmare, especially if you suspect it is due to someone else being careless, whether accidentally or deliberately.

“There are many foods and substances that are harmful to animals and it is important for owners to educate themselves and those around them about these. 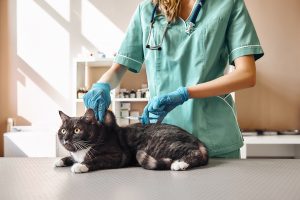 “To minimise the risk of your pet eating something that could make them ill, there are some precautions you can take at home. Make sure to keep food locked away, secure your bins and remind guests not to leave food out.”

By far the most common cause of pet poisoning identified by the 100 veterinary surgeries asked was consumption of chocolate by dogs at 91%, with wildlife the biggest concern when it came to cats at 54%.

Most common causes of dog poisoning identified by vets

When it came to cats, wildlife was the most common problem cited at 54%.

Most common causes of cat poisoning identified by vets

Worryingly, half of dog and cat owners whose pets were poisoned suspect it was done deliberately, with one in six certain that the poisoning was with intent.

The survey found the most common place that owners suspect their pet was poisoned is while on a walk with either them or a friend or family member (26%),  followed by the garden (16%) and while outside with a paid walker (15%).

When it came pet insurance claims for poisoning, 91% were for dogs, with and Labradors and Cocker Spaniels the two breeds at the top of the payout list.

Madeline Pike, added: “If any pet owners are concerned that their cat or dog may have consumed something poisonous, vets have identified the most common symptoms to look out for including; tremors, excessive panting, high heart rate and sickness/diarrhoea.”