VetPartners  has marked its seventh anniversary with a £5,000 donation to help safeguard the future of animals at risk of extinction.

The donation to Nature’s SAFE will help their mission to save animals from extinction by collecting, storing and regenerating reproductive cells from endangered species.

The veterinary group, which now boasts links with eight Northern Ireland practices, said it wanted to do something its colleagues feel passionate about to celebrate the seven years since VetPartners was founded by vets on October 31, 2015.

Nature’s SAFE is one of Europe’s dedicated facilities capable of the long-term storage of live cells from animal species that are at the greatest risk of extinction.

According to Nature’s SAFE, more than 40,000 species are at danger of extinction, and a donation of £5,000 is enough to preserve one species through their cryoconservation process.

Working with leading reproductive scientists and cryobiologists, they use state-of-the-art methods to preserve cells, allowing them to be frozen and then thawed and used to establish pregnancies, restoring genetic diversity in endangered animal populations. They have managed to preserve many species in recent years, including the Mouse Deer, Colombian Black Spider Monkeys and the Panther Chameleon. 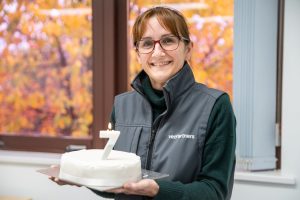 VetPartners CEO Jo Malone, left, said: “We wanted to do something special to mark our seventh anniversary and highlight a worthy cause close to the hearts of our colleagues who care passionately about the environment and preserving animal species.

“With the help of us all, Nature’s SAFE is creating a future and a legacy we can all be proud of so we wanted to support their important work to save animals from extinction. The veterinary profession is caring by nature and looking after our planet for future generations is a natural extension of the work done every day in our practices to look after animals in their care.”

The donation has been provided through VetPartners’ £120,000 charitable fund, with the veterinary group pledging £10,000 a month to help charities and worthy causes throughout the year.

Tullis Matson, Founder and Chair of Nature’s SAFE, said: “Nature’s SAFE is busy securing future options for biodiversity, by acting now. We have now cryopreserved our 124th species, and are one pioneering step closer to saving many endangered species from extinction. We are delighted to have the milestone of VetPartners’ seventh anniversary marked with support for safeguarding animals through our living biobank.”

Established seven years ago by Mrs Malone, a small animal vet at The Minster Veterinary Practice in York, VetPartners has grown into one of Europe’s leading veterinary healthcare businesses.

From small beginnings with three practices in the North of England, it now has 148 practices across the UK and has expanded into France, Italy, Germany, Spain, Portugal and Switzerland.